On the last 10th of July, IADC Office in Kabul held the inauguration ceremony for the new Computerized Axial Tomography Scan Department at the Estiqlal Hospital in Kabul,  funded under the project "Support for the National Program Health for the Provinces of Kabul and Herat".

Due to the precarious security conditions, was not possible organizing the ceremony at the hospital, so at the event was given a symbolic and auspicious aspect for better times in the Country, as well as an important opportunity for exchanging and analysing strategies and activities on IADC funded health program.

IADC  confirmed  its commitments in the health sector, particularly in the provinces of Kabul and Herat, where the Italian Cooperation has built a trust relationship with the Institutions and the Afghan population.

The presentation of dr. Jabarkhail, project coordinator, highlighted the achievements in the following areas of intervention:

- Technical and financial assistance to the Ministry of Health in Kabul and to the Herat Provincial Health Administration;

- Strengthening and improvement of the Estiqlal Hospital in Kabul;

- Establishment of an ambulance service in Herat and in three satellite stations;

- Technical and financial assistance to the Institute for Health Sciences in Herat.

In addition to the analysis of the achievement, new initiatives were discussed, including the hypothesis for further renovations inside the Estiqlal. Extreme satisfaction was expressed for the results of the diagnostic center for breast cancer: since its inauguration, December 2016,  to present, it has performed 1038 mammograms, identifying 386 suspected cases. The establishment of an ambulance service in Herat was also mentioned for its high contribution in saving lives.

If the first victims of a health system in a war-torn country are women and children, today thanks to the support of the international community, were the Italian Cooperation is in the frontline, the Afghan health system has registered visible improvements with a positive impact on population’s health.

Access to primary health services is now affordable to the majority of the afghan people, maternal and child mortality rates have been reduced and life expectancy has increased, and the italian funded health program has largely contributed to these results.

The Estiqlal Hospital, historical partner of the Italian Cooperation, is today equipped with a staff of 524 resources and cares for about 340 people a day between outpatient services and hospital stays, which explains the request for an even more prolific collaboration with the Agency.

On the Italian side, the essential elements for the delivery of a full ownership have been identified: a strategic vision to plan new initiatives, and a functional data collection, to assess the impact of IADC-funded projects and the analysis of sustainability for future ones.

The ceremony ended with the donation to the Afghan counterparts of a commemorative plaque that will be affixed to the entrance of the CT Scan Department of the Estiqlal Hospital. 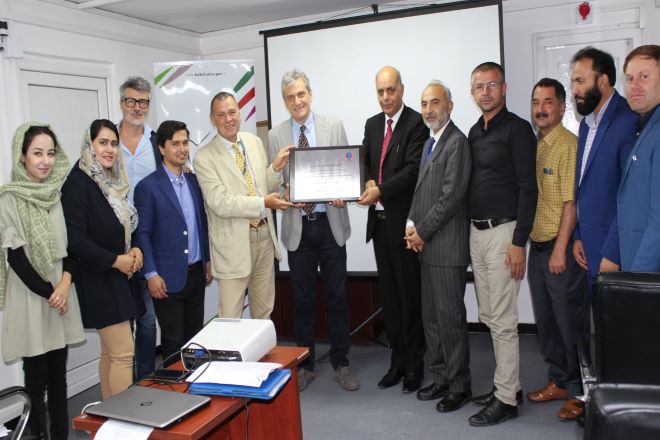